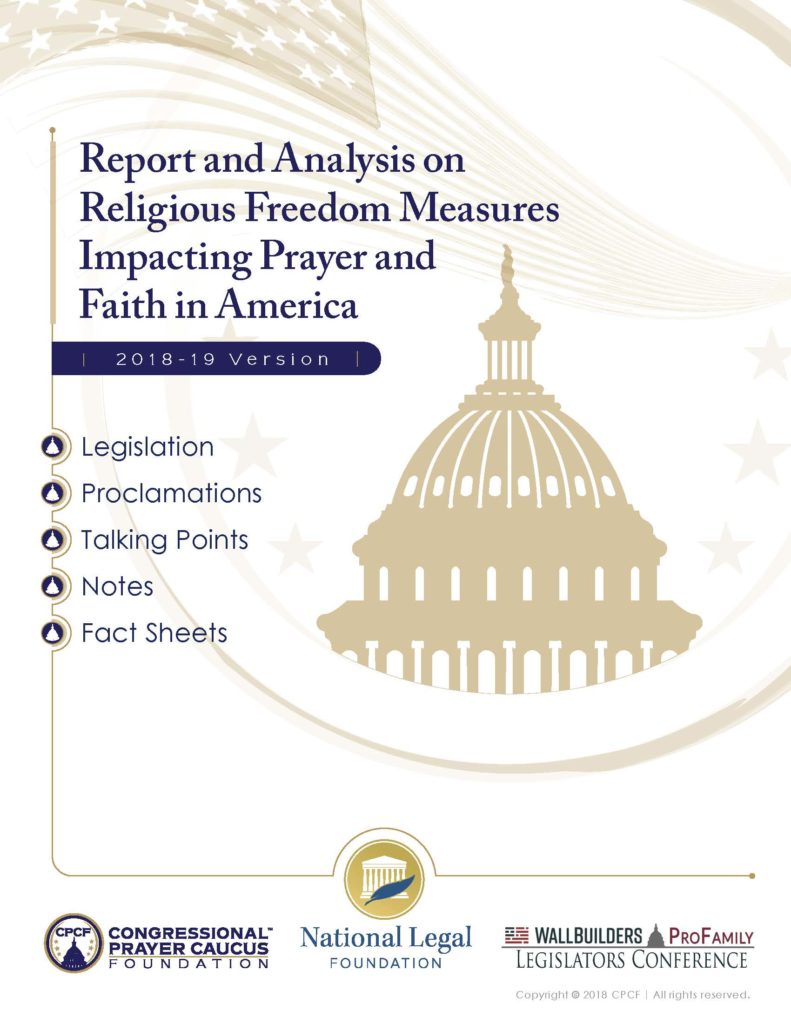 One of the National Legal Foundation’s key projects keeps making news. It is a package of model bills and resolutions that the NLF and others have put together for the use of state legislators. The packet is distributed by the Congressional Prayer Caucus Foundation as part of its “Project Blitz.”

We’ve previously posted on our Facebook page about President Trump’s praise for various states considering or enacting laws that require or allow public schools to offer electives on Bible literacy, addressed in articles such as this one, this one, and this one. As these articles show, these laws are almost always based on our model bill.

And last week, the NLF’s frequent collaborator (and a contributor to the model bills packet), Rick Claybrook, blogged about some of the ad hominem attacks from activists on the Left. Most of these attacks disparage our motives and lie about at least some of the content. To take the two easiest examples, our model bills designed to protect the right of people of faith to participate in the marketplace without violating their religious convictions are routinely described as seeking to legislate bigotry; and our model bills promoting the national motto, “In God We Trust,” and supporting the Bible electives are routinely criticized as trying to establish a theocracy or to marginalize non-Christians, often by using the pejorative term “Christian nationalist.”

There’s even a sophisticated website dedicated to tracking and fighting our model bills and resolutions. It’s a joint effort of American Atheists, Freedom From Religion Foundation, Interfaith Alliance, PFLAG (previously known as Parents and Friends of Lesbians and Gays; and later as Parents, Families and Friends of Lesbians and Gays), Political Research Associates, Religious Coalition for Reproductive Choice, Secular Coalition for America, and Jews for a Secular Democracy.

Wow! We must be doing something right.

Interestingly, the website’s home page features a famous picture of certain Christian leaders praying with President Trump and Vice President Pence in the Oval Office.  Of course, the website doesn’t bother to disclose that no one involved in drafting our model bill packet is in the picture, nor that the packet’s origin pre-dates President Trump’s election. But such details would not help ignite the Left’s base, and so they must be left out.

However, we have not previously addressed criticism coming from certain academic circles. The rest of this Update addresses some of that. In so doing, we return to, and zero in on, criticism of the Bible literacy electives.

With regard to such electives, some scholars and social commentators believe there is a sinister conspiracy afoot in America.

In a late January opinion piece in the religion section in the Washington Post, Mike Chancey, a religious studies professor at Southern Methodist University, wrote in support of some Bible literacy classes in the public schools. He recognizes that having a good general knowledge of the Bible is important to a basic understanding of our country’s dominant cultural and political heritage and that education that omits the teaching of religion is deficient.

Yet he objects to other Bible literacy classes. Why? According to Professor Chancey, they are the product of that sinister conspiracy.

He noted that several states currently had bills pending that would encourage appropriate teaching of the Bible and that the majority of those bills are taken from model legislation drafted by the NLF. He criticizes that model legislation, not because of its substance, but because, he says, it is not needed, as it is already constitutional to teach the Bible in a non-proselytizing way in public schools.

Therefore, they only possible explanation—according to Professor Chancey—of the current push for Bible Literacy education is that it is driven by “religious-right groups . . . [seeking to] favor certain forms of socially and theologically conservative Christianity.”

But he misses the point that “religious-right groups” can, and very often do, act in the interest of society at large, not merely in their own interest. And if both interests can be advanced at the same time; that’s good legislation, not something sinister, not something that favors conservative Christians over the rest of society.

We agree with Professor Chancey that teaching the Bible in a non-proselytizing way is constitutional. What he ignores is that many public school administrators and teachers don’t know that. They believe that teaching about the Bible is totally out of bounds or that, because they are not sure what is constitutional and what is not, it is better just to avoid the subject entirely. Statutes modeled on the NLF bill help to overcome that false notion and encourage Bible education, while giving educators comfort by specifying what is proper and what is not under Supreme Court precedent.

And this is the motivation behind our model bill. Simply put, we believe that Bible literacy is a part of cultural literacy, especially in the United States. After all, it was Newsweek Magazine, not some “religious-right” activist, that correctly summarized the role of the Bible in this country:

For centuries the Bible has exerted an unrivaled influence on American culture, politics, and social life. Now historians are discovering that the Bible, perhaps even more than the Constitution, is our founding document.

Newsweek is surely right. If you put together any group of independent scholars, and asked them to list the top five books that have had the greatest impact on our culture, or on the world, the Bible would surely be on every scholar’s list.

And teaching these classes is not synonymous with state-sponsored proselytizing. In our schools, we teach government class, and we don’t want teachers to advocate that students become Democrats or Republican. But should that happen, we would not stop teaching government classes, nor would we accuse the state of wrong doing. The hypothetical misconduct of an individual teacher cannot dictate the content of the curriculum.

Finally, acknowledging—as Newsweek has—the unique role of the Bible in America, and therefore its unique role in cultural literacy, makes public school electives in Bible literacy a smart move for all of our states. And such electives do nothing to close our classroom to the sacred texts of other religions. Each state remains free to do whatever it thinks is wise regarding the teaching of those texts.

Thus, it seems clear that there is no sinister conspiracy afoot to “favor certain forms of socially and theologically conservative Christianity.” Rather, there is a desire by groups like the NLF to contribute to cultural literacy. And cultural literacy education benefits all students, whether a conservative Christian, a liberal Christian, a member of a different faith, an agnostic, or an atheist. It is time to stop maligning the motives of the National Legal Foundation, the Congressional Prayer Caucus Foundation, and others. 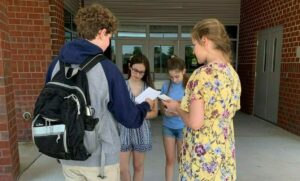 The NLF Fights to Stop Discrimination Against Religious Schools